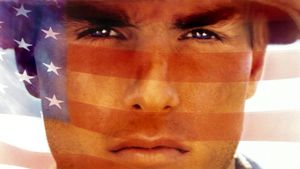 In his career-defining role in Born on the Fourth of July, Tom Cruise returns to the big screen at The Ridgefield Playhouse on Saturday, July 4 at 8:30pm as part of the Cohen and Wolf, P.C. Movie Series.

Based on the autobiography of Ron Kovic, the unflinching, violent story of the Vietnam vet turned activist garnered Tom Cruise his first Academy Award nomination.  This is the second of three films by co-writer/director Oliver Stone to explore the effects of the Vietnam War (Platoon and Heaven and Earth are the others), the gritty drama won Stone his second Academy Award for Best Director.

The Playhouse is excited to bring the community together in a safe way to share the experience of seeing iconic films back on the big screen this summer.  There is a certain type of magic when you see movies on the big screen with other people.

Based on his autobiography the film, set in the mid-1960’s, tells the story of suburban New York teenager Ron Kovic (Tom Cruise) who enlists in the Marines, fulfilling what he sees as his patriotic duty. During his second tour in Vietnam, Kovic accidentally kills a fellow soldier during a retreat and later becomes permanently paralyzed in battle. Returning home to an uncaring Veterans Administration bureaucracy and to people on both sides of the political divide who do not understand what he went through, Kovic becomes an impassioned critic of the war.

For tickets ($10 in advance, online or $12 at the door) call or visit the box office, 203-438-5795 or go online at ridgefieldplayhouse.org.  The Ridgefield Playhouse is a non-profit performing arts center located at 80 East Ridge, parallel to Main Street, Ridgefield, CT.